American craft brewers are not just good at making amazing, flavorful beer—they are also great at using their beer as a force for good. Today there are more than 5,600 breweries entrenched in thousands of communities sharing this common theme. Craft brewers advance our country one community at a time.

Craft brewers donated an estimated $73.4 million to charitable causes in 2016, up from $71 million in 2014. The most recent figure is from the 2016 Brewery Operations Benchmarking Survey, otherwise known as BOBS, released by the BA in the second quarter of this year. The Brewer Association’s biennial comprehensive survey of America’s craft brewers compiles brewery operations information to establish and share industry benchmarks. BA members can go to BrewersAssociation.org to access the full data.

Not many business communities can say they give throughout the year, week in and week out, to charities and non-profits. Craft brewers should excel in sharing this mantra: “Craft brewers use craft beer as a cause for other causes.” With the estimated figure from BOBS, we have an amazing updated dollar amount tied to craft brewers’ charitable contributions.

Craft brewers give in a multitude of ways. These American brewing entrepreneurs and risk takers strive to build culture and community, putting people and principles ahead of profit. Craft brewers go above and beyond to help make the planet a better place by contributing time and again to the charities that matter. Here’s a sampling of recent contributions, compiled from press releases sent to The New Brewer. 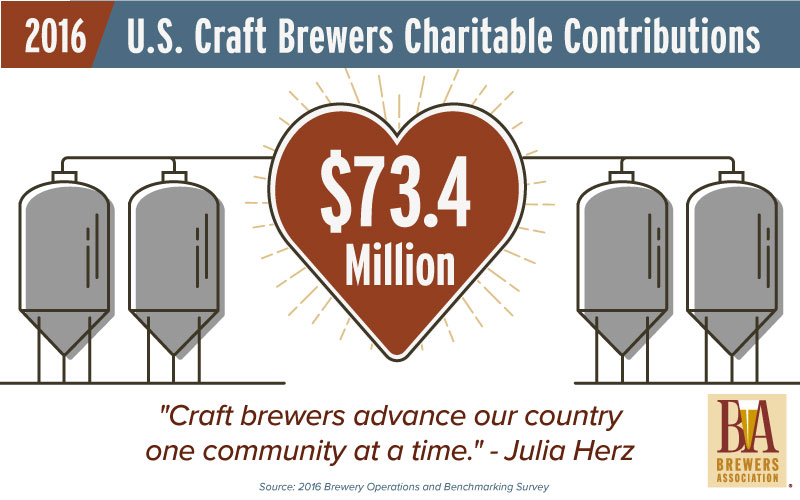 By nurturing a collaborative beer culture while many other businesses focus solely on competition, craft brewers have earned their reputation as do-gooders. I feel it when I walk into taprooms, brewpubs, and festivals: an unprecedented level of collaboration and support for many charitable causes.

So with this updated estimated dollar amount, breweries should consider summarizing and publicly sharing, again and again, the ways they contribute directly to local communities and towns. How many jobs do you provide? How many tour visitors do you host? What are some of your charitable contributions and favorite non-profit causes?

This article was originally published in the September/October 2017 issue of The New Brewer—a bi-monthly journal published by the Brewers Association.

Europe’s Puzzling Nobility: Hops from the Styrian Hinterland Behind the...